(I was delighted to get a comment from Pradip Shah on “HT Parekh: Conceptualising an Income-gearing Product in the 1950s When Incomes Were Limited ”.http://nitamukherjee.blogspot.com/2022/08/ht-parekh-conceptualising-income.html He was a part of the core team of ICICI employees who worked with HTP on the launch of HFDC. A brilliant Harvard alumnus who had joined ICICI in the mid-1970s at the invitation of HTP, he was one of the few who left ICICI to join HDFC once it was set up. So, it was a pleasure that Pradip responded to my blog by recounting some of his earliest memories of working with HTP in HDFC to set trends that others would follow. I am happy to share these on this platform. For it places in the public domain some archival information about the first institution for housing finance in India. And, as I have emphasised, memories of personal experiences are the best archives! Thank you, Pradip.)

I was fortunate to have had the opportunity to work closely with HT Parekh in setting up HDFC. I was instrumental in changing the concept of HDFC to make it a pure lending organisation. HT Parekh had wanted to create an organisation that would build homes and sell on instalments, following HUDCO where Keshub Mahindra (later HDFC vice-chairman), who endorsed the idea, had been chairman. Indeed, the proposal prepared by NC Singhal and me in mid-1977 and sent to Aga Khan and IFC (W) was based on that business model. 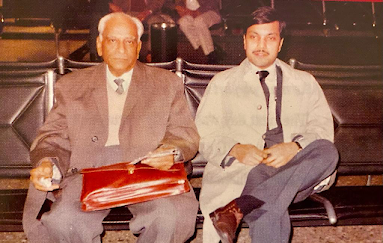 But I saw how building societies and savings and loan associations (S&Ls) worked, on my trip abroad in December 1977. The trip was a suggestion of HT Parekh, who spoke to the then head of Standard Chartered Bank, who arranged for me to visit Abbey National Building Society in Baker Street and stay at the Standard Chartered chummery in a London suburb (those were days of severely-restricted availability of foreign exchange). Using contacts, I was able to get appointments with some S&Ls in USA, a building society in Philippines (where there had been turmoil in money markets) and a building society in Singapore. Unfortunately, most of these organisations thought of my visit as an imposition; one US S&L head heard me for a minute then promptly escorted me out saying he did not have time to answer questions on how S&Ls functioned. But the few days I got to sit in the Abbey National branch and the interaction I had with a couple of people there made me realise that a scalable, sustainable housing finance organisation had to be a pure lending organisation, not one that would build and sell homes on instalment-payment basis. (Incidentally, ALL people I met appreciated my HDFC business card that you, Nita, designed and got printed!)

I came back and drafted the lending policies which were repeatedly not approved till we had a board meeting where I forcefully presented the lending-against-income and lending-against-alternative-security proposals. The alternative security (personal guarantees of respectable family members or friends; assignment of LIC policies, etc) overcame the objections of Suresh Shroff of Amarchand Mangaldas and YH Malegam who were advisers to HT Parekh, who rightly said that flats under construction offered no security. The practice of lending-against-income (and the instalment-income ratio) were copied by the industry that followed (imitation is the best form of flattery) as was our brochure (often word-for-word), loan-application form, alternative security idea and even the ‘annual rest’ (reducing the principal at the end of one year for all principal-repayments made monthly). Indeed, the annual rest practice, that HDFC started and the industry copied, had to be modified later to coincide with the accounting year-end. I had borrowed the annual rest idea from building societies to enhance returns to HDFC as HT Parekh was keen to lend at 10.5%, a below-market rate at that time.

Indeed, it was this lending policy that resulted in our loan for tea workers for which Mr Hirianniah (then head of technical at HDFC) and I visited the Tata Tea estate near Jorhat in February 1979.